India beat Bangladesh by 5 runs (D/L method) in match number 35 of the ICC Men’s T20 World Cup 2022 at the Adelaide Oval on Wednesday, November 2. Sent into bat after losing the toss, India put up an impressive 184/6 on the board. Virat Kohli top-scored yet again with an unbeaten 64 off 44 balls, while KL Rahul scored exactly fifty. In Bangladesh’s revised chase of 151 in 16 overs, Litton Das slammed a superb 60 off 27 balls. However, the chasing side lost their way after his dismissal and ended up on 145/6.

Earlier, India captain Rohit Sharma failed again as he was dismissed for 2 by Hasan Mahmud. However, Rahul returned to form with a much-needed half-century. The opener featured in a steadying second-wicket stand of 67 with the in-form Kohli, who struck his third half-century of the T20 World Cup 2022.

Rahul hit three fours and four sixes before being dismissed by Shakib Al Hasan. The right-hander attempted a whip over short fine leg, but only managed a top edge. Suryakumar Yadav came in and continued his excellent form. He raced to 30 in 16 balls and his fine cameo ended when he was bowled by Shakib. 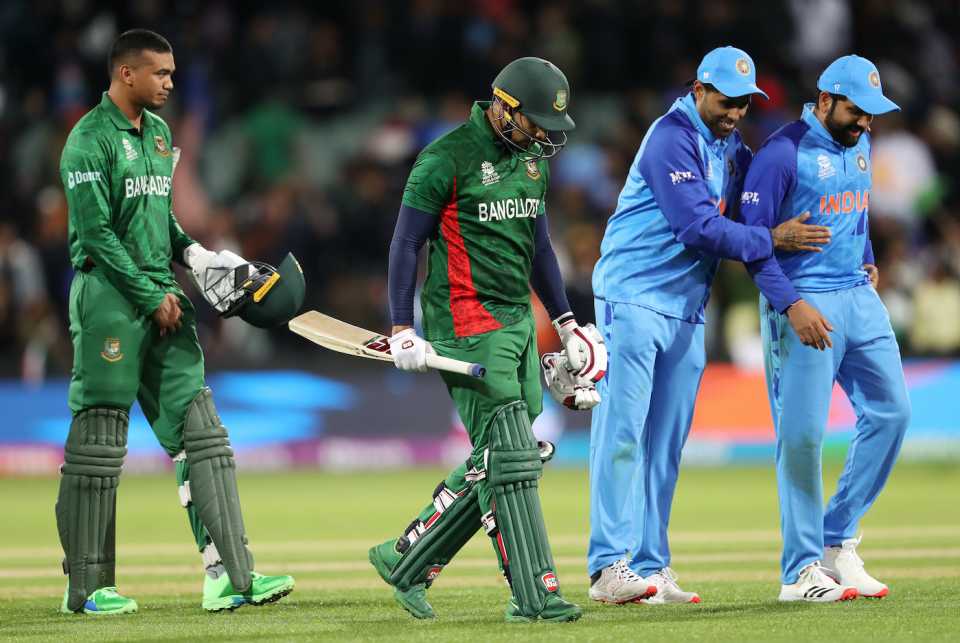 Hardik Pandya (5), Dinesh Karthik (7) and Axar Patel (7) all perished cheaply while looking for quick runs. However, Kohli held things together for India, remaining unbeaten, a knock which included eight fours and one six. Ravichandran Ashwin came in and contributed 13* off 6 balls, with one four and a six, to held India cross the 180-run mark. For Bangladesh, Hasan Mahmud claimed 3 for 47, while Shakib picked up 2 for 33. Taskin Ahmed went wicketless, but conceded only 15 runs in his four overs.

Chasing 185, Bangladesh were off to a flier courtesy Das. They were 66/0 after seven overs when the rain came down. Bangladesh lost momentum when they came out to chase the revised target. Das was run out by a direct hit from Rahul. Najmul Hossain Shanto then fell to Mohammed Shami for 21 off 25 balls.

Speaking after the win, Indian captain Rohit said, “Bit of both. I was calm and nervous at the same time. It was important for us as a group to stay calm and execute our plans. With 10 wickets in hand it could've gone either way but after the break we did well.”

--By A Cricket Correspondent